This is an exceptionally tumultuous year. As the pandemic has made injustices more visible and brought important issues to the surface, activists, politicians, and other segments of the public have responded broadly and created a new momentum for change.

To support this momentum, the Stone Center on Socio-Economic Inequality at The Graduate Center, CUNY, and The Graduate Center’s Office of Public Programs, through its Promise and Perils of Democracy project, funded in part by Carnegie Corporation of New York, organized a three-part Coalitional Democracy Conference, which took place on October 2, 2020. It featured the voices of academics, activists, politicians, journalists, and clerics on the how-to of democratic change at this crucial moment in history. They passionately discussed the theory and practice of coalition formation for advocacy organizations, political parties, and social movements. Feel free to visit The Graduate Center, CUNY’s YouTube channel to view all three panels, or watch the video below.

Panel 1: The Theory and Practice of Coalitions

The first panel of the Coalitional Democracy Conference focused on the “Theory and Practice of Coalitions.” The panel was moderated by Dara Z. Strolovitch, who began by recognizing the expansive roots of these ideas in Black feminist work of the 1970s and 1980s. The panelists then set the stage for the rest of the conference by discussing the challenges of agenda-setting and issue inclusion, differences in coalition design on the right and the left, identity conflicts internal to organizations, and the role of popular political culture more generally in forging or foreclosing democratic coalitions.

Allyn Brooks-LaSure, executive vice president for communications at the Leadership Conference on Civil and Human Rights, emphasized the hard work that coalitions require but also offered lessons from the history of the Leadership Conference, founded in 1950 to work on civil rights legislation and now comprised of more than 220 organizations. The conference changed tremendously over time to represent a greater diversity of issues. This type of dynamism is important for coalitions, Brooks-LaSure asserted, as the only way to achieve change is to avoid being in competition with one another and to stand together so that specific issue organizations can in effect speak with the support of more than 200 other organizations behind them. “Who is being left out and what can we do to bring them into the fold” remains the Leadership Conferences’ guiding principle, he said. However, as the strength of the organization and similar coalitions has grown in recent years, so have backlashes and challenges from opposing groups.

Professor Alexander Hertel-Fernandez from the School for International and Public Affairs at Columbia University questioned the common assumption that it is easier for the right to coalesce because they are more ideologically united than the left. In fact, he argued, they are divided along several fault lines (e.g., anti-state libertarians vs. religious groups seeking governmental restrictions on abortion or business groups seeking government subsidies). Nonetheless, the right has spent decades constructing durable organizational structures despite these internal divisions. Hertel-Fernandez extracted potential lessons for the left from his research on the American Legislative Exchange Council (ALEC). Perhaps most importantly, ALEC devoted more resources to organizing at the state and local levels, whereas left-leaning groups focused more on the federal level, though this is starting to change. 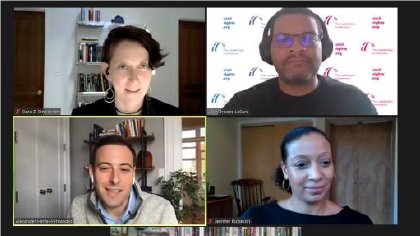 Professor Jennifer Richeson is a social psychologist at Yale University. She explained how and why the feeling of group membership is important for people, providing a sense of connection and protection. Yet marginalized groups are often asked to shed parts of their identities when they join coalitional organizations (e.g., transgender people working in a coalition of groups against climate change). These dynamics may lead to “in-group/out-group dynamics,” causing strife and hierarchical structures within the coalition. Instead, Richeson suggested building bridges and forging common bonds by constructing additional or superordinate identities rooted in a set of shared experiences, which combine in-group favoritism and out-group sympathy. A “common humanity is the most powerful way to forge connections” among disparate groups, Richeson argued.

Journalist and author Sarah Smarsh shared her knowledge of a little talked about but still very sizable group: white working-class progressives. Speaking from her own experience growing up in rural Kansas, Smarsh argued that the white working classes have been courted heavily by the right during her lifetime (i.e., since the 1980s). To reach them, the right has used cultural markers to great effect, such as the American flag and the national anthem, which were not previously associated with partisan identities. This in turn sows division and separation rather than connection and coalition building. Smarsh sees evidence of white working-class groups being receptive to messages of the left as well as the right, and advocates for educational efforts to foster a lost sense of civic and political agency within a coalitional framework.

View Panel 2 here and Panel 3 here. For more videos of the conference or other topics, please visit CUNY’s YouTube channel.